DARPA's Soft Robot: Now You See It, Now You Don't 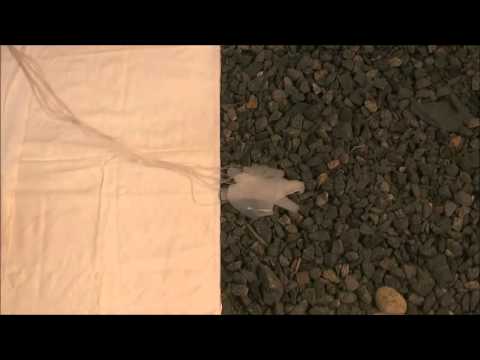 Harvard University researchers working under DARPA's Maximum Mobility and Manipulation (M3) program recently demonstrated the ability to manufacture low-cost silicone robots with microfluidic channels that allow for air and fluids to be pumped in to control movement, color and temperature.In this video, a soft robot walks onto a bed of rocks and is filled with fluid to match the color of the rocks and break up the robot's shape. The robot moves at a speed of approximately 40 meters per hour; absent the colored fluid, it can move at approximately 67 meters per hour. Future research will be directed at smoothing the movements; however, speed is less important than the robot's flexibility. Soft robots are useful because they are resilient and can maneuver through very constrained spaces. For this demonstration, the researchers used tethers to attach the control system and to pump pressurized gases and liquids into the robot. Tethered operation reduces the size and weight of such robots by leaving power sources and pumps off-board, but future prototypes could incorporate that equipment in a self-contained system. At a pumping rate of 2.25 mL per minute, color change in the robot required 30 seconds. Once filled, the color layers require no power to sustain the color.For additional information on DARPA's robotics programs, see: http://go.usa.gov/UEL. This video has been sped up. The actual duration is 2m 27s.