DARPA's Cheetah Bolts Past the Competition 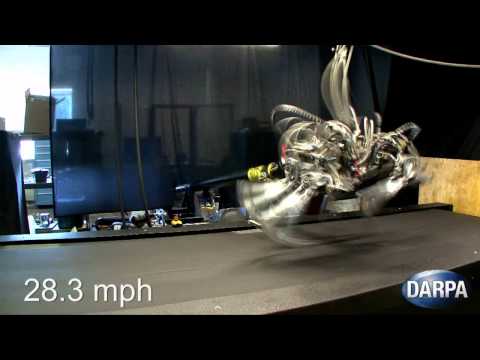 DARPA's Cheetah robot—already the fastest legged robot in history—just broke its own land speed record of 18 miles per hour (mph). In the process, Cheetah also surpassed another very fast mover: Usain Bolt. According to the International Association of Athletics Federations, Bolt set the world speed record for a human in 2009 when he reached a peak speed of 27.78 mph for a 20-meter split during the 100-meter sprint. Cheetah was recently clocked at 28.3 mph for a 20-meter split. The Cheetah had a slight advantage over Bolt as it ran on a treadmill, the equivalent of a 28.3 mph tail wind, but most of the power Cheetah used was to swing its legs fast enough, not to propel itself forward.Cheetah is being developed and tested under DARPA's Maximum Mobility and Manipulation (M3) program by Boston Dynamics. The increase in speed since results were last reported in March 2012 is due to improved control algorithms and a more powerful pump.DARPA's intent with the Cheetah bot and its other robotics programs is to attempt to understand and engineer into robots certain core capabilities that living organisms have refined over millennia of evolution: efficient locomotion, manipulation of objects and adaptability to environments. By drawing inspiration from nature, DARPA gains technological building blocks that create possibilities for a whole range of robots suited to future Department of Defense missions.For more information on Cheetah and DARPA's other robotics programs, visit: http://go.usa.gov/rVqk. To get the latest DARPA news, photos and videos, follow us on Twitter at: http://www.twitter.com/darpa.